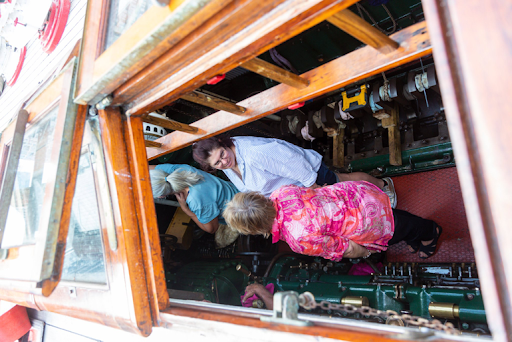 Posted at 20:55h in News by Massey Shaw
Share

The Massey Shaw has had an interesting summer, hosting a wide range of groups, from the family members of a Royal Artillery Sergeant who the Massey rescued from the beaches of Dunkirk in 1940, to two Women’s Institute Groups – who expected to stay about 20-30 minutes but actually stayed for over two hours!

The daughter of Sergeant Maine RA, contacted the Massey Shaw team, via the website, about arranging a visit in April. Sue told us that her father hadn’t spoken about his war time service, other than to express his gratitude at being rescued by the Massey Shaw. She had not realised that the Massey Shaw still existed and was keen to visit. Sue visited with her daughter and they spent over an hour on the Massey, visiting all areas, including the engine room and the wheelhouse. Sue mentioned that she was a post-war child and without the Massey Shaw she would not be here. This news certainly increased the emotional impact of the visit: It is one of the most emotional moments when we host the family of an evacuee, sadly we no longer expect to host an actual evacuee.

The visit lasted about 90 minutes and both Sue and Alexa left moved and cheered to have finally boarded the vessel that brought their dad and grand-dad home.

After the visit Sue sent the following message:

“Good evening Bill.   We have just got home. It was an amazing visit and one that I will remember always. Thank you so much for making us feel so welcome. It made me feel very close to dad again even for a brief time. You spoke about the Massey Shaw with so much affection. I would love to meet you again at Dunkirk 2020.  The planning wheels will be set in motion asap. My nephew has asked how to get his dad, my brother a visit too now.  I will need to explain the steps and ladders to him and we’ll see.  Very best wishes to you and you colleagues for the splendid work that you do.”

These kind words were also matched by a donation to help us keep the vessel operational. I have to say that Sue and Alexa were not the only ones to feel the emotion of the visit!

During the summer we were joined by a group of twenty people from The Streatham Common W.I ranging from babes-in-arms to retirees. We split the group into three elements so that they could be moved around the Massey comfortably. Each group in turn visited the engine room, crew space and the wheelhouse followed by a short lecture with contemporary images about the fireboat and its service at Dunkirk. With the highlight of the visit to manoeuvre the fire-fighting monitor (without water!). Chatting to the group they said that we were part of a trip to Central London and they thought 20 minutes would be enough.  They stayed two hours! The group clearly liked the trip as we hosted a second group a few weeks later!

In September, a group of Massey Shaw and London Fire Cadets, Marine Unit, volunteered to help launch the rowing boats from the Thames foreshore at the south end of the Isle of Docks as part of 2019’s Great River Race. We were at the river by 06:00 (after sleeping on board), looking forward to the promised bacon rolls (and they were good!), ready to drag the boats onto the foreshore so that the crews could board and then we would push the crewed boats off – sometimes before the crews were completely ready, but they were the late arrivals and the foreshore was rapidly becoming less shore and more Thames!  And we didn’t have boats to get us back to ‘safety’.

Of the three Massey Shaw volunteers two of us went for involuntary swims in the Thames; my swim was due to a submerged rock that tripped me up and I was grateful to remember to keep my mouth closed as I headed downwards!  As we had the proper safety gear – flotation devices not life jackets – my head was kept out of the water and it wasn’t that cold! Nevertheless the ‘cold water shock’ was still quite surprising and it took a few moments once I regained my feet to get my breath back.  Clearly that was true as I turned round and tripped over the rock again! Swim two!

Still we all agreed that we would volunteer again next year!

For those of you interested in the engine repairs, I will leave that to those that understand the issues better than me – however when you’re working on the engine and the Massey decides to mark her territory the results can be spectacular – at least I got  seat on the way home!

Finally we have some new merchandise, available from our website shop here.