We often get asked about the status of any previous London fireboats and the history of how Massey Shaw came to be in existence, so we put together this short timeline of fire-floats and fireboats.

Our archiving team are constantly looking for new information, photos and stories about the unique role fireboats have played in the history of London and the River Thames.

Thanks to Bill Hickin, David Rogers and the Retired London Fireman blog for collating information on previous fire-floats and fireboats, you can visit the website here: http://retiredlondonfireman.blogspot.com/

If you know more details about previous London fire-floats and fireboats, please get in touch!

Prior to Alpha II the River Service was served by raft-mounted steam pumps drawn by steam tugs, hence the term “Fire Float”, also continuing in use to describe fireboats until the NFS period when the term Fireboat became the standard designation

Fire-floats were not new to the River Thames. They had been in use since before the Metropolitan Fire Brigade was formed in 1866. The Insurance Companies funded the London Fire Engine Establishment and they had large rowing boats with manual pumps which to attack large riverside fires. But it was the Brigade's Chief, Capt. Wells (a former Royal Naval officer) how drew and designed a shallow draft fire-float, one based on a Royal Navy gunboat. Placed into service the Alpha set the new benchmark for the Brigade's river fire-floats. 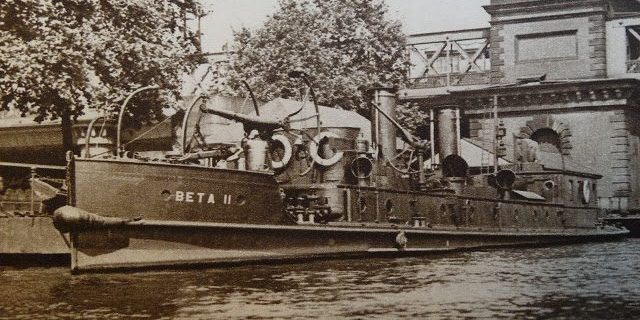 In 1906 Capt. Hamilton (later Rear Admiral) got the London County Council (LCC) to approved the purchase of a larger, more powerful, fire-float, the Beta II. The vessel was almost 100 feet long, 16 1/2 feet wide and had a draft of 3 feet. Its cost, at £11,000, raised some eyebrows with the Members of the LCC's Fire Brigade Committee but the LCC approved the purchase. Built by Forrest and Co, the Beta II was fitted with twin screw engines and two water tube boilers. It made the vessel capable of steaming along at the rate of ten to eleven miles an hour under normal conditions. The fire-float was fitted with four pumps, supplied by Shand Mason of Blackfriars, each one capable of discharging one thousand gallons per minute at a pressure of 140 pounds per square inch. When commissioned in 1909 the Beta II was stationed at Cherry Garden Pier in Rotherhithe, on the south bank of the Thames. 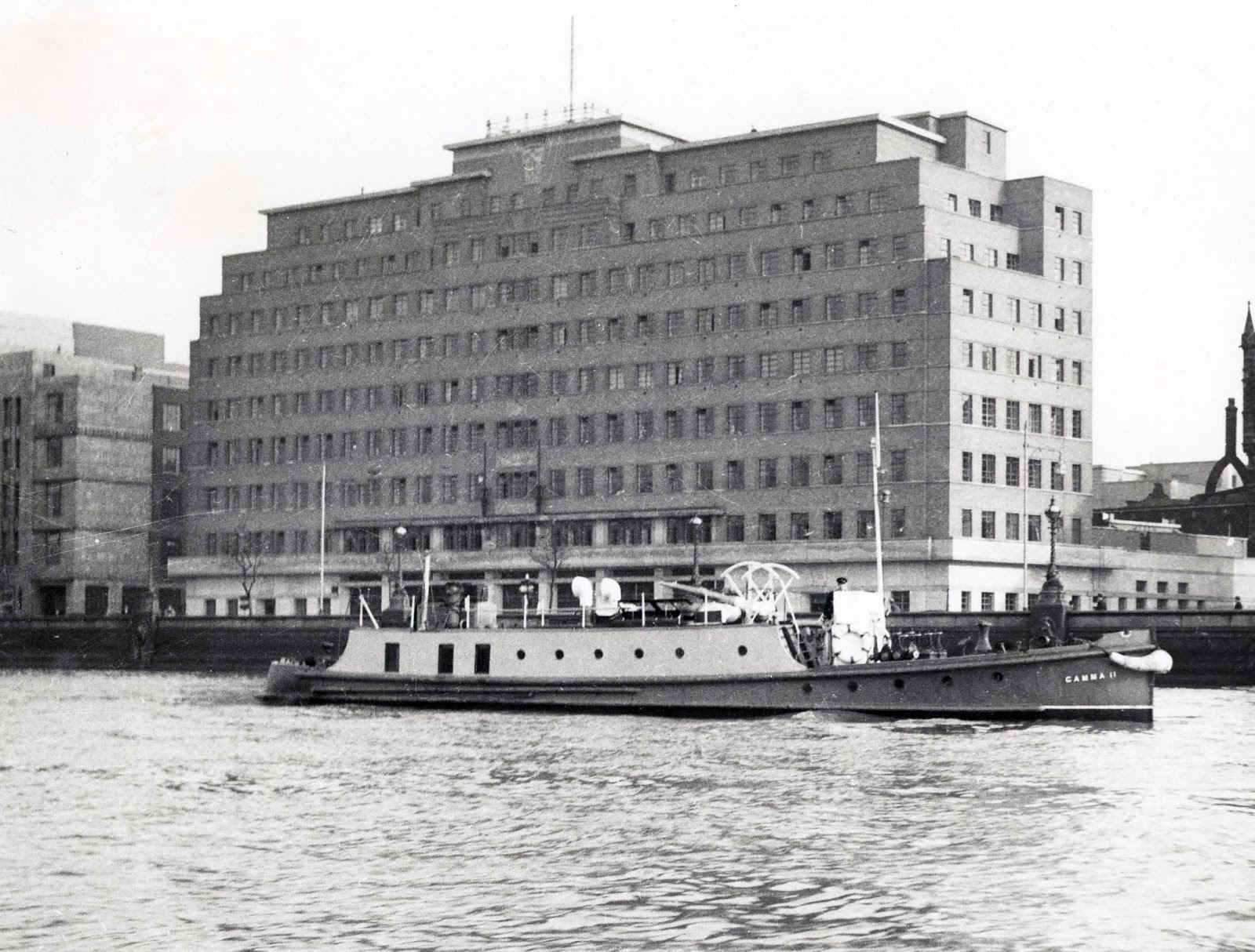 The Beta would be followed by Gamma II two years later. Built by Thorneycroft and Co the Gamma was the brigade's first motorised engine fire-float. 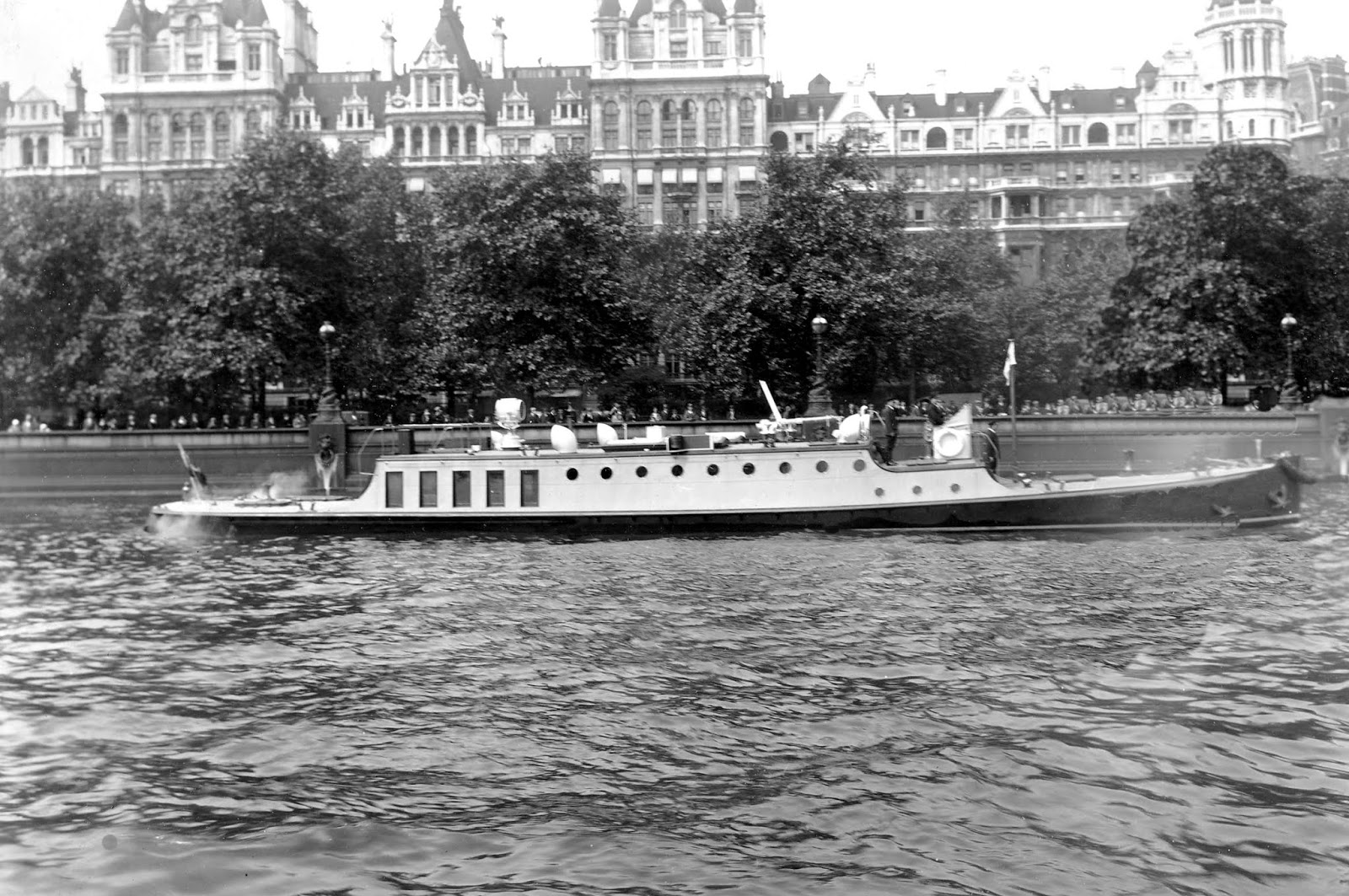 Launched in 1913, the Delta II fireboat was stationed at Battersea Bridge.<br /> The first three fireboats were originally named without the suffix 'II' but this was added in 1911/12 when it was discovered there were existing vessels registered with these names. 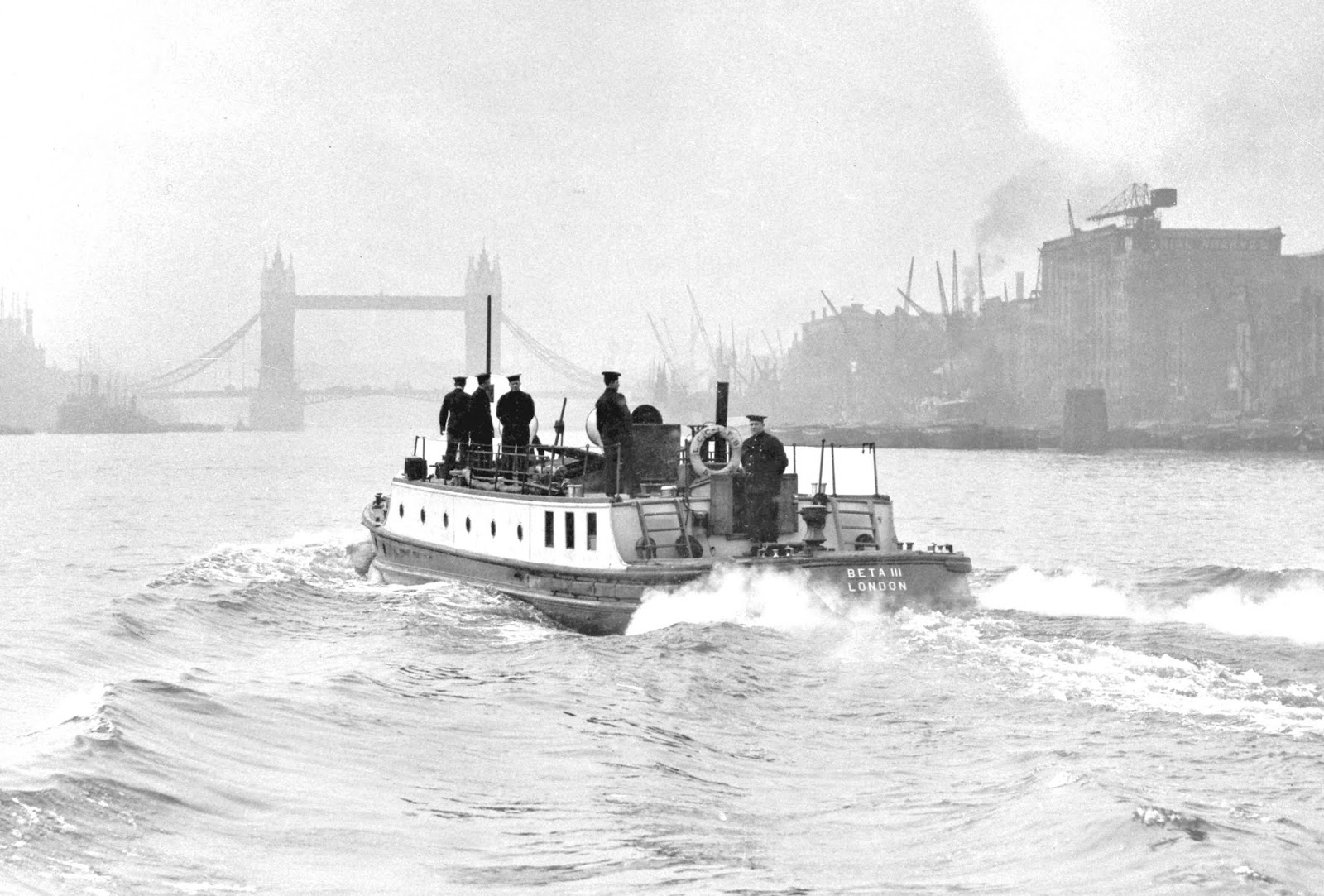 In 1926 a new fire-float joined the brigade's river fleet, the Beta III. The days of the fire tugs and barges had long since been consigned to the history books and the new craft replaced the aged Alpha and the Beta II. Her top speed was ten knots and could pump 2,000 gallons per minute. Built by Merryweather and Sons, her hull was made of British steel and her deak laid in teak. She would serve London admirably until the early 1950s. 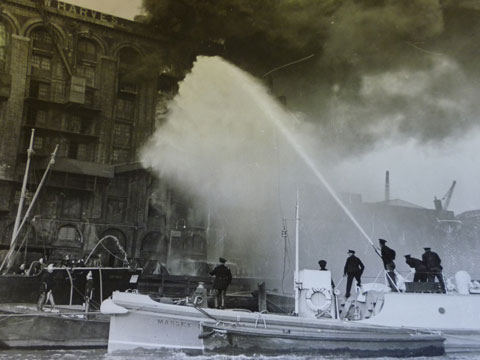 Launched in 1935, Massey Shaw replaced the Beta III with a much larger pumping capacity of 3,000 gallons per minute and a monitor that could throw a column of water into the air higher than most buildings along the Thames. 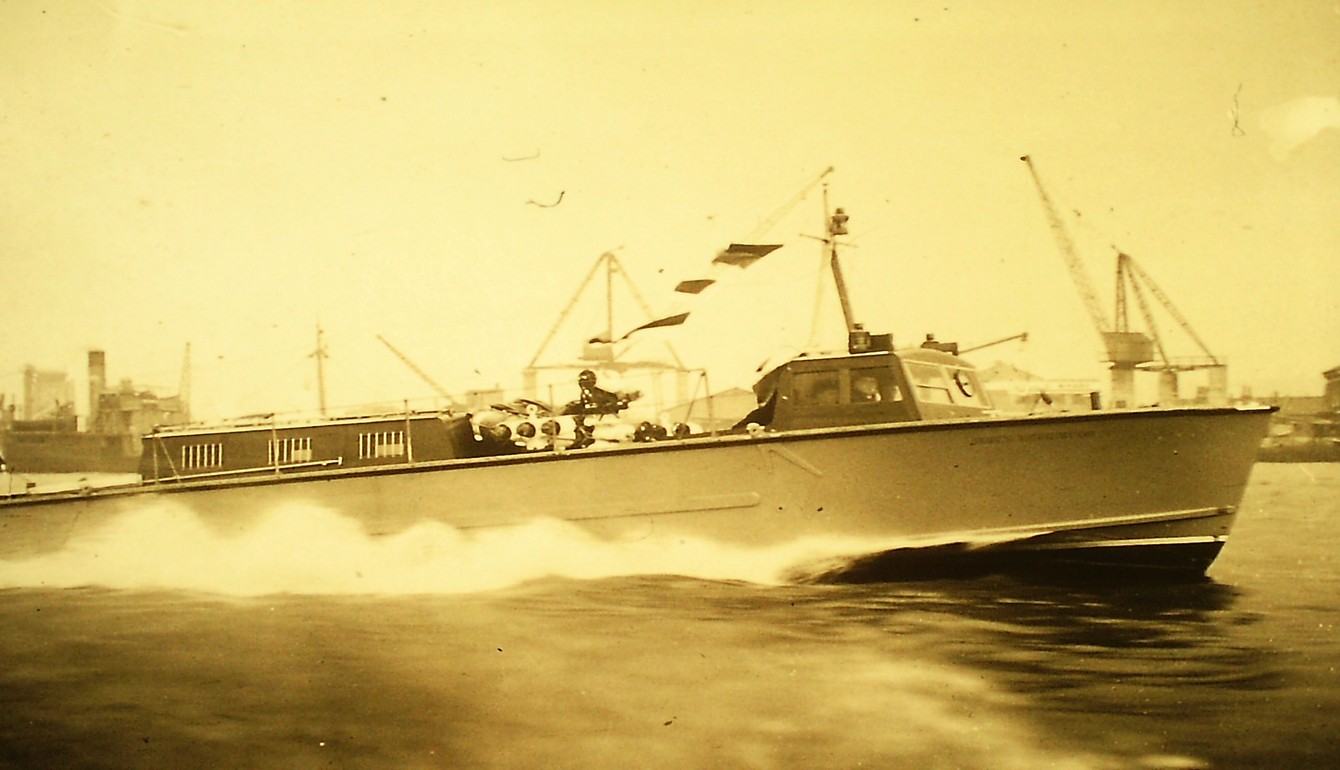 Replaced Gamma II but which returned to service in WWII

NFS River Thames Formation allocation of LFB regular fireboats during 1942/43 was as follows; Massey Shaw at Blackfriars, Atash Kush at Blackfriars (Atash Kush, due for export to Iran, was requisitioned), Gamma II at Lambeth, James Braidwood at Lambeth, Beta III at Cherry Garden.

Originally an AFS training vessel it became operational in 1970 replacing Massey Shaw when it was decommissioned from operational service. 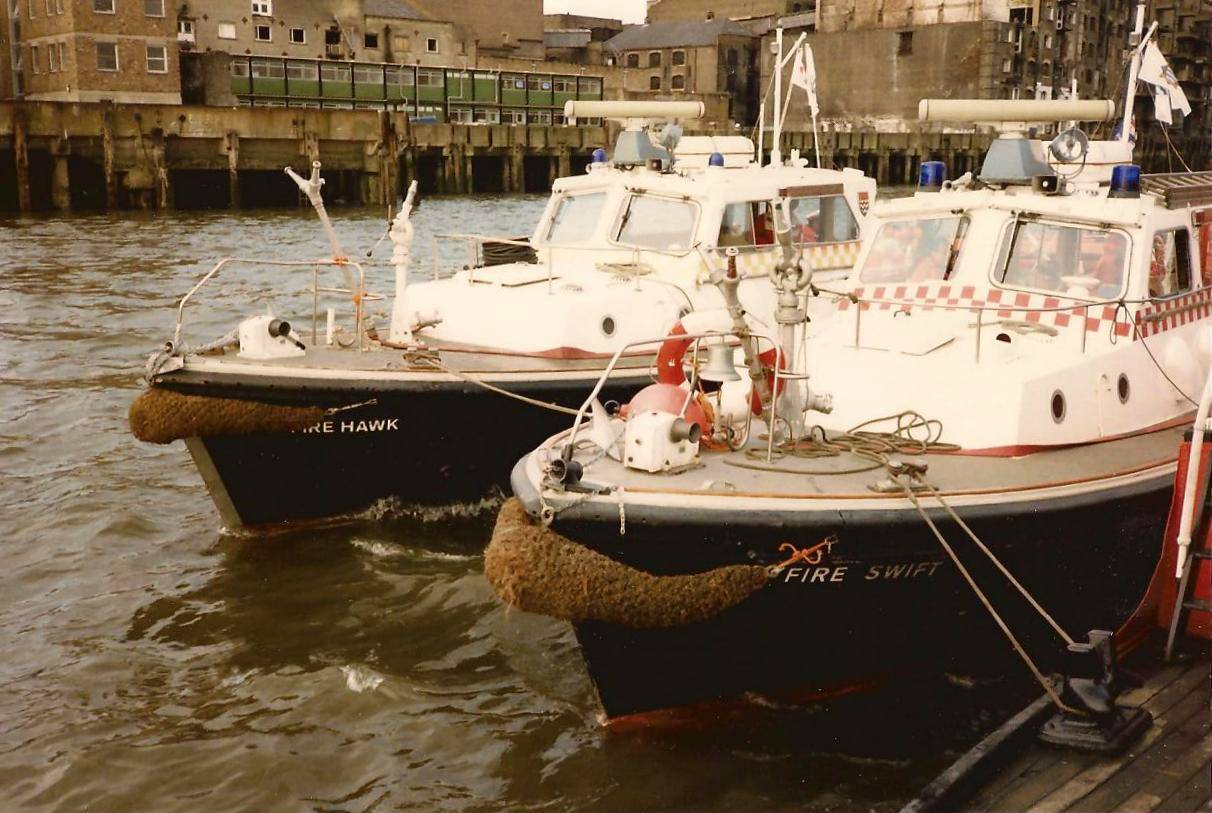 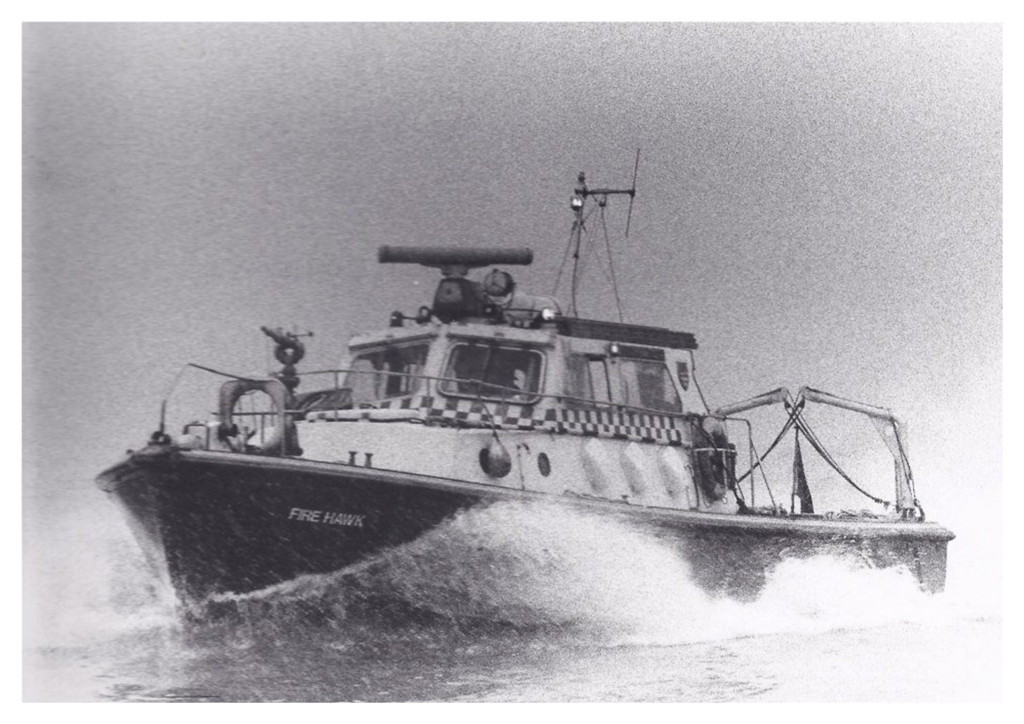 The Hawk and Swift were used until the London Pheonix arrived 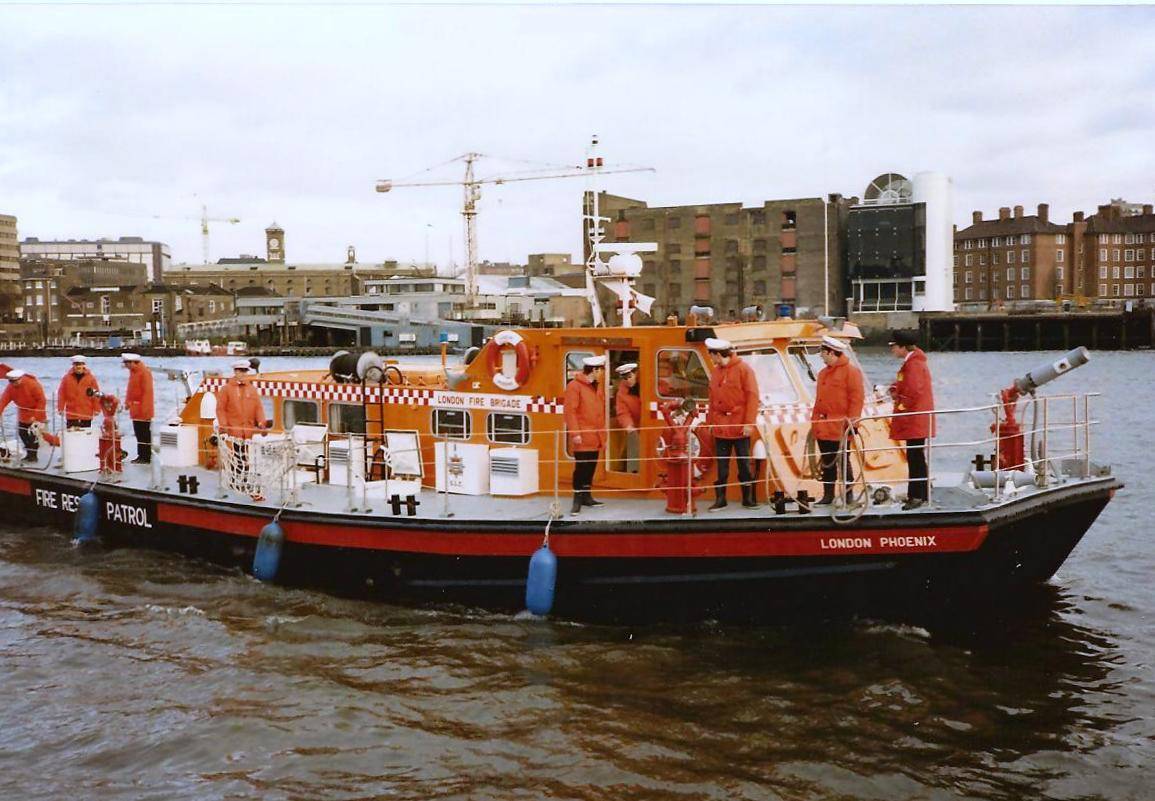 As the London Fire Brigade continues to develop it’s river services, the role and requirements for modern day fireboats is changing. Explore the current river fireboats in operation or visit the LFB website for more details. 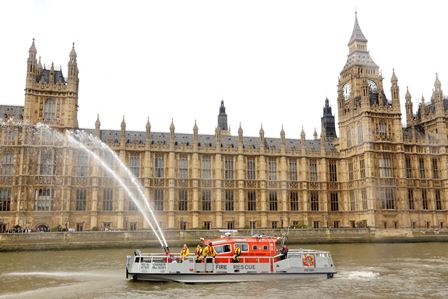 Built in 1999 by Northumberland-based shipbuilder Alnmaritec, they are used for a variety of incidents, such as people stranded in the River Thames, fires on boats, crashed boats, and riverside property on fire.<br /> Fire Dart and Fire Flash are both fast twin-engined (2 x Volvo TAMD 370bhp with a top speed of 30 knots, 33 mph), single-hulled landing crafts. They have been designed with shallow draft – a flat bottom – for use on rivers and inland waterways. Both have a reinforced keel, so we can ‘beach’ the boats on the Thameside and lower our access ramp without harm.<br /> Both have on board 2 Hamilton 291 water jets supplying 1800 litres of water per minute.

In 2019 the London Fire Brigade commissioned the replacement of Fire Dart and Fire Flash. The London Fire Commissioner approved the placement of orders under the vehicles and equipment contract with Babcock Emergency Services for two fireboats. The specifications for the new fireboats include; ability to pump 7,000 litres of water per minute to shore, travle at speeds of up to 30 knots at 80% throttle and ability to plane on the water when fully laden with normal crew numbers and a full<br /> complement of allocated equipment.